jaye simpson, it was never going to be okay

jaye simpson's (they/them) debut poetry collection, it was never going to be okay, is comprised of strikingly powerful affective complexities from beginning to end, which extend beyond comfortability to, ultimately, grow. they explained to David Ly in their interview with PRISM international that "As a foster kid I was told hundreds, if not thousands, of times that it was going to be okay, and then I came across this comic series and one of the lines was 'it was never going to be okay,' and with that realization the protagonist came into their own power. Me realizing that it wasn't going to be okay allowed me the ability to cope and then heal" (June 2021). simpson is an Oji‑Cree Saulteaux Indigiqueer from the Sapotaweyak Cree Nation and uses the imposed colonial language to describe themselves as a Two-Spirit, trans, queer, non‑binary woman ("Queering and Reclaiming"). it was never going to be okay is a remarkable addition to trans Indigenous literature that ingeniously navigates hope, love, trauma, and growth.

The collection is sectioned into four parts with an intentional sequencing to move the reader through the various informative moments and experiences, all of which are interwoven with intricate affects. The composition—specifically the arrangement of their words and lines throughout the pages—of simpson's poetry is strikingly dynamic. While the prose throughout their collection might have been inspired by necessity for their spoken word performances, it skillfully encourages thoughtful engagement of the reader throughout the entirety of the collection. simpson's poetry examines the traumatic effects of the settler foster care system historically, intergenerationally, and individually, and specifically speaks to the impacts of childhood sexual abuse by a non-Native foster mother as a young, trans Native child. These experiences produce "her," which is what simpson names dissociation in the early poems "her. (i.)" and "her. (ii.)". their poems move through (dis)connected relationships with their biological family of origin as well as those that are romantic, sexual, and platonic. simpson writes devastatingly beautiful queer, trans erotics in various poems which fortunately adds to the literature of Indigenous eroticism as specifically trans and queer. Moreover, in this significant debut collection, simpson references their experiences of queer polyamory and trans sex work as an Indigiqueer non-binary woman. Tremendously, though, it was never going to be okay emphasizes (queer) Indigenous ways of trauma healing that tenderly encourages queer Indigenous kin to persistently cope and heal from (colonial) traumas.

simpson explains in an interview with the University of Victoria's independent newspaper, Martlet, that they dedicated it was never going to be okay to "all the queer NDN foster kids out there" because they were raised to believe, by settler colonial foster systems enacting a logic of Native elimination, that they were the only queer Indigenous foster child to exist (Wolfe). "To think that you're alone, in that sense, is one of the biggest acts of violence that can be done onto you" simpson observes (Feb. 2021). To be made to feel alone, isolated, and alienated, especially when experiencing historic, intergenerational, and mezzo- and micro-systemic types of traumas, is arguably also an act of violence. Throughout simpson's poetry, they skillfully provide a type of descriptive reflection for queer Native youth to recognize their experiences and themselves through such affectively powerful prose. There needs to be a realization of one's own experiences before someone can ever metabolize or even heal from them (Menakem).

In "/ /" there is enough ambiguity in their specificity that many other queer Indigenous kin might also be able to impose and recognize some of their own experiences for what they are, painful and valid: 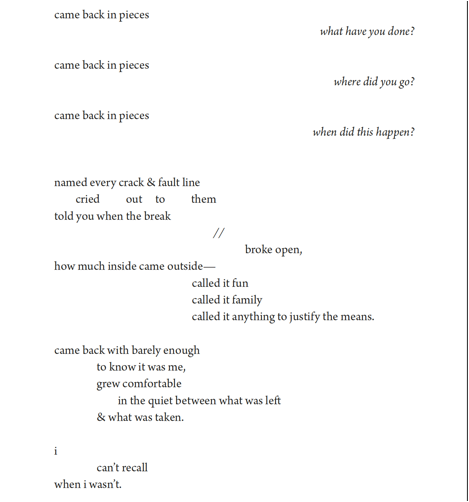 simpson's use of space in their stanzas and throughout the page as well as the presence of italics necessitates the reader to critically engage with the words and their ambiguously interpretive meaning. As the italicization prompts the reader to invoke a different voice than the speaker, or of their own as the reader, the oscillating dynamics of the poem has the potential to instigate the reader's own experiences of shame, pain, stress, and potentially trauma throughout readings of the poem. Incredibly, I find that each time I read "/ /," often repeatedly before continuing further along simpson's path in their collection, I am able to superimpose various layers of narrative detail to this poem that refocus certain moments of pain and trauma that I have come to know personally and through the shared experiences of others that I care for. simpson's incredible ability to foster resonating feelings throughout this entire collection creates remarkable opportunities, particularly for queer Native foster children: to recognize themselves and their experiences as well to feel validated and in relation with other (queer) Indigenous kin, all through poetry.

When jaye simpson was asked in their interview with Christopher Driscoll if writing it was never going to be okay was a form of catharsis for them, they adamantly stated that "It's less about a catharsis of exorcising trauma, that kind of puts the onus on the speaker, and what i'm doing is saying that this has happened to me because of someone else, look at... the one who is enacting that. It is not about it me..." (Feb. 2021). It is seemingly their decentering of self throughout their collection that provides an opportunity for queer Native foster children to recognize themselves through simpson's poetry. If catharsis is the process of releasing strong or repressed emotions, then simpson certainly provides a collection of poetry that might be the cardinal catalyst of it for queer, trans Native youth, potentially amongst innumerable others.

Menakem, Resmaa. My Grandmother's Hands: Racialized Trauma and the Pathway to Mending Our Hearts and Bodies. Central Recover Press, 2017.